40 years now 40 years in the desert then

In 1446 BC in the Sinai, the Israelites had among their tribes people like Harry Reid and Hillary Clinton and John Murtha. Do you know what happens when you allow defeatists in your midst? You wander the desert for 40 years. What happened back then did not happen in June of 1967, but unfortunately is happening now in Israel and the United States. And what is happening is that defeatists have taken control of both countries. Let me explain.

For those of my readers who are not students of the Bible, let me give you a quick explanation of why God commanded Moses to wander the desert for 40 years before allowing the Israelites to enter the promised land.

The LORD said to Moses, 2 "Send some men to explore the land of Canaan, which I am giving to the Israelites. From each ancestral tribe send one of its leaders." Moses picked the most exceptional men from among the 12 tribes (excluding Levy who would not get any land) as spies to travel through the Land of Canaan in advance of its conquest by the People of Israel.

Forty days later, only Joshua and Caleb were excited about this wonderful land of Canaan. The other ten spies told the nation that the Canaanites were unconquerable giants; and worse, the land was killing its inhabitants. The Israelites believed this defeatist report, and began to whine about returning to Egypt. This pissed off God so much, after all He promised them this land and now they disbelieved His word, that God decreed that this bunch of whiner losers does not deserve to enter the land and should, instead, die in the desert wandering for one year for each day they scoured the land of Canaan.

Now you may wonder why would God be so upset just because the ten men were not hot about Canaan. So what? Here's the problem. God went to extraordinary lengths to make Canaan the most desirable place on the planet. For example, Canaan was wonderfully fertile with single clusters of grapes so large that two men had to carry it back hanging from a pole (See logo of the Israel Tourism Ministry above). Instead of marveling at how great the fruit was, the spies looked on the dark side of life and figured with grapes so large the inhabitants had to be giants. This is how defeatists think.

God also fashioned another miracle for the spies: to keep them from being detected by the locals, God killed off enough Canaanites, timing the deaths to coincide with the arrival of the spies, that the population would be distracted with too many funerals to pay attention to the Israelite spies among them.

And how did the defeatist spies react? They took the worst explanation, that everyone was dying in this God-forsaken land and they lamented that conquest would pointless. Thus with the theory of giant inhabitants and an evil land, they came back with the conclusion that the war could not be won, that they had lost before it was even started and even if they won, the land would devour them anyway. Instead of seeing the deaths as signs of God's protection and the grapes as God's blessing, they took the defeatist view of life. When God commanded them to conquer, they ran away like Liberal cowards. 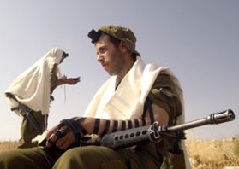 Now fast forward to June of 1967, exactly 40 years ago. As I have previously written, I was in Jerusalem during the 6 Day War. It wasn't until a few days after the war ended that I found out that Israel had gone to all the cemeteries and had prepared thousands upon thousands of plots ready to bury their dead in case the war went bad. But they did not run away, nor did they have defeatists in their midst crying about all the potential deaths that surely were awaiting them.

All the Israeli pilots, whether religious or not wore tefillin, now was not the time to poke a finger in God's eye. The nation was united. If the defeatists and appeasers who live in Israel today were in power then, Israel would never have prevailed and that small fraction of democracy in the Middle East and the permanent homeland of the Jews would have ceased to exist.

Now 40 years later I reflect on the cowards in both the Israeli and our own government. How can we expect to win when Harry Reid declares the War lost, the burden too great, the enemy unconquerable? Amazingly, we have lost fewer soldiers each year in Iraq than was lost each year in Clinton's peace time, yet the burden is too great?

The enemy has not asked us to surrender, yet Harry Reid has raised the yellow flag, oops white flag. Hillary, Harry, Murtha and Nancy should be banished until their carcasses are wasted in the wilderness.