Typhoon Lagoon and the Reconquista 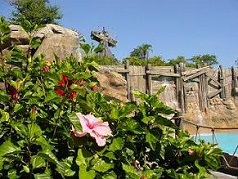 First, some background: three months ago in my post The Portuguese Reconquista and New Jersey Bookies, I wrote that once Europe got rid of its Muslims the great age of European exploration began. I noted that Pedro Álvares Cabral was the first European discoverer of the sea route to Brazil.

Now the story: We went to Typhoon Lagoon early yesterday at Walt Disney World in Orlando Florida. The first thing I did was get a locker to store my valuables and was handed locker key number 1468. I noted that the Disney cashier had a name tag with "Mohammed" engraved on it, so I said to one of the other cashiers, "Oh, key number 1468 - that was the year the Portuguese explorer Pedro Álvares Cabral, who discovered Brazil, was born [Some sources say 1467]. Did you know that the Portuguese got a head start in the great European exploration of the world because they got rid of Muslims before anyone else?

The other cashier asked, "What are you, a history buff?" I answered, "No - just that I recently wrote a blog article about Cabral."

Now here's the interesting part: Cashier Mohammed, in a calm, not threatening, matter-of-fact tone, responded: "Well, you know the whole world will be all Muslim soon, anyway."

"Yes," I replied just as matter-of-factly, "I believe that is a very strong possibility."

The truth of the matter is that I believe soon the world will be either all Muslim or not Muslim at all. Depends on who we elect to lead us in the coming years.

I know I will get some emails asking why I was so confrontational with Mohammed. But suppose I was given key number 1692 and the cashier's name was Matthew and I made a reference to the witches hanged by Christians in Salem, Massachusetts starting in that year. Would any Christian today identify himself with Christians of older eras? I don't think so. In fact, when Christians today read about the Inquisition, do any identify themselves with those Christians of old? Obviously not. BTW, as regards Salem, Massachusetts, the city even has a website about the witch trials; they're not ashamed of what those Christians did because they do not identify with them. 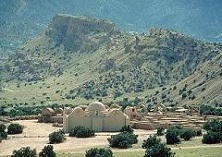 Dar-Islam ,Abiquiu, New Mexico.
And so it was with Mohammed the Cashier. He tempers his anger over the ejection of Muslims from Portugal and Spain 500 years ago and bides his time with the comfort of knowing that one day, all the world will be one Caliphate. He knows this to be true because he knows there are other Muslims not willing to bide their time.

Mohammed is a peaceful, quiet, hard-working American Muslim that appears to be no threat to America. I wouldn't be surprised if non-Muslim friends of his, useful idiots, point to him and say, "See, all the Islamophobes are crazy, Mohammed is a decent fellow, wouldn't harm a fly." But they would be wrong. Every day, millions of Mohammeds go about being Muslims, spreading the word that one day all the world will be under Islamic rule, asking for concessions to Muslim sensibilities, making the public places easy for Muslims and difficult for infidels. Every day, Muslims reproduce at a rate many more times that of the average Kafir (Kafir has exactly the same meaning to Muslims as "nigger non-believer"). Every day Muslims emigrate into the nations of western civilization, changing the demographic.

The signs you see Muslims holding up that say "One day America will be Muslim" are not being held up by al Qaeda, terrorists have no patience to wait for one day. No, those signs are held up by your average Yusef bin Average.

Dar al Islam is dedicated to the betterment of our society, and strives to achieve its purpose through education in the broadest sense, through cooperation and networking, and through programs which benefit both Muslim and non-Muslim people of North America. Founded 20 years ago, Dar al Islam built the North African-style mosque and attached madressa, or school, with the dream of starting a model village showcasing Islam in America. The Dar al Islam mosque and madressa were constructed in the early 1980's, this large training and worship structure contains a school, a library complex, elaborate prayer rooms and living quarters.

Note: Thanks to reader William K. for reminding me that the Salem witches were hanged not burned.