When Bank Robbers dont get sh*t 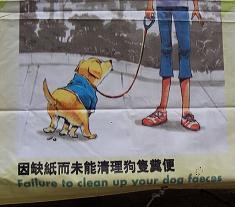 First you have to read the story, which by the way is no Bulls*:

A Chinese woman has told how robbers snatched a parcel of dog poo wrapped in newspaper out of her hand outside a bank.

Mrs Chen, of Laohekou city, was waiting in the bank to withdraw money when nature suddenly called for her dog.

"While I was waiting in the queue, my dog had to poo. So I asked for several pieces of newspaper to wrap the poo," she said.

After wrapping it, Chen left the bank, and was waiting to cross the street to throw the parcel into a rubbish bin when the robber struck.

"A motorcycle stopped swiftly before me, the man on the rear seat seized the package from me, and they sped away," she said.