The Difference Between Jews and Muslims 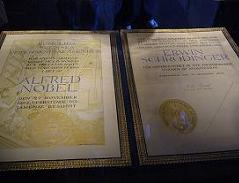 From an email going around:

This year, Islam's and Judaism's holiest holidays overlapped for 10 days.

During that period, Muslims racked up 397 dead bodies in 94 terror attacks across 10 countries... while Jews worked on their 159th Nobel Prize.

I have some problems with this email:

But, as multiculturalists may say, this comparison is unfair to Muslims, after all, Jewish culture emphasizes learning and scholarship and has been that way for thousands of years while most Muslims today live with camels in poverty and ignorance.

Well, I have to agree. I believe that just as we make accommodations in America for black students who were brought up on drugs and ghetto-blasters, so should the Nobel committee recognize that Muslim culture consists of nomadic wanderers and desert dwellers. Therefore there should be prizes for innovative techniques for Sex with Goats, How to Molest female infants, the theory and practice of honor killing of wives and daughters and the efficient slaughtering of innocent infidels and even fellow Muslims.

If we make these minor changes we can give Muslims back some pride. After all, it is quite embarrassing to have over a billion and a half adherents while gaining less than a handful of Nobel Prize Laureates or to have added nothing to modern civilization for over a thousand years.

It should also be noted that many more Jews would win Nobel Prizes if the members of the Nobel Foundation in Stockholm, Sweden weren't such Dhimmis worried about their violent and barbaric Muslim immigrants. Even Norway's Peace Prize Committee is anti-Israel. Despite the fact that Israel is, per capita, the most creative scientific country in the world, very, very few Nobel Prizes are awarded to Israelis. (2)

Jewish News Weekly,
25 Oct 2002,
Jews rank high among winners of Nobel, but why not Israelis?

"My impression is that many of the considerations made by the Nobel Prize committees are political," says Israeli writer Yehoshua Sobol. "For instance, Jimmy Carter was awarded the peace prize many years after he had finished his active life as a peacemaker because they wanted to stick it to [George] Bush. The Nobel Prize committee is made up of human beings and they are certainly not free of prejudices and political considerations. Maybe if Israel were more popular and more politically correct in the eyes of the world we would see more prizes going to Israeli scientists."

Robert J. Aumann receiving his Prize
from His Majesty the King Carl XVI
Gustaf of Sweden at the Stockholm
Concert Hall, December 10, 2005.
© Nobel Web AB 2005 Photo: Hans Mehlin
Even when an Israeli wins a Nobel Prize, there are movements afoot to relieve him of his prize.

A petition was sent to the Royal Swedish Academy of Sciences, protesting the decision to award Aumann (and Schelling) with the Nobel Prize. Among the reasons for the opposition (click here for the full text of the petition):

The Academy's reasoning that these persons have "enhanced our understanding of conflict and cooperation through game-theory analysis" is monstrous. In fact, the Academy has awarded the prize to two warmongers.

Ever since the inception of the State of Israel, Arabs have had this romantic notion that through wars and revenge we can return to our past glory.

Of course, they don't tell us which past they are referring to.

Was it when we were governed by the Ottoman Empire or by England and France?

Or was it more like 1,300 years ago when spears ruled the battleground?

So, what's different about the Jews? First, Botticini and Eckstein explain why other groups didn't leave the land. The temptation was certainly there: Skilled urban jobs have always paid better than farming, and that's been true since the time of Christ. But those jobs require literacy, which requires education—and for hundreds of years, education was so expensive that it proved a poor investment despite those higher wages.

But the Jews (like everyone else) were beholden not just to economic rationalism, but also to the dictates of their religion. And the Jewish religion, unique among religions of the early Middle Ages, imposed an obligation to be literate. To be a good Jew you had to read the Torah four times a week at services: twice on the Sabbath, and once every Monday and Thursday morning. And to be a good Jewish parent you had to educate your children so that they could do the same.


(1): Here is the list of Jewish Nobel Prize Winners by category:

Robert J. Aumann
Nobel Prize for Economics 2005
(awarded together with Thomas C. Schelling, USA)
"for having enhanced our understanding of conflict and cooperation through game-theory analysis"