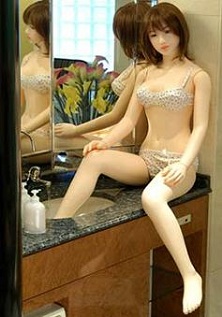 There are two things that tripped up Eliot Spitzer: One, he needed large amounts of money which had to be laundered so that its purpose would not be traced (and which was eventually traced to the escort club anyway) and two, his "date" blabbed about their relationship.

If she kept quiet then it would only be speculation as to what really happened and more importantly if the sex only cost a few hundred bucks then the large money transfers would never have flagged the bank which eventually alerted the Feds.

Silicone dolls are available that are anatomically suited for the sex trade. A very pretty doll can be rented for only a few hundred bucks and you can be sure she won't repeat any dastardly deeds done to her. If your needs are more than an occasional fling, you can purchase one for less than $10,000 and it can be paid for with a check or credit card, so no money laundering is required. Then, your only expense is cleaning the unit. And yes, the company can discreetly bill the item as an entertainment system.

If you are one of those "I Buy Only American", Cyborgasmatrix has available an "anatomically correct, robotically actuated" sex doll modeled from a life-cast of the body of Pandora Peaks, a retired American adult model, actress and stripper. The life-size (actually super life size since Pandora has 44 H-Cup breasts) doll is made of solid elastomeric gel on an articulated skeleton. According to the company, "she speaks, she moves, she looks, feels, and smells real." Although she speaks, she doesn't talk about you to anyone else.

These Japanese scientists have unveiled the most human-looking robot to date, well at least in the public domain. Secret research is being done now which looks towards the future to build robots so real they will fool humans, in other words they maybe sitting next to you and you would never even know it. The Japanese scientists call their new robot android Repliee Q1 Expo. She flutters her eyelids in normal human increments, looks like she is breathing and moves her hands just like a human would. This robot has over 42 actuators. But indeed, this is merely the first step in human type robotics.