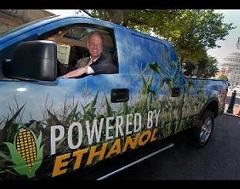 Contrary to all the hype we now know that Ethanol is not the liquid filling the cup of the Holy Grail: it requires massive subsidies (In 2005 alone corn subsidies totaled $9.4 billion); it will never displace any significant amount of imported oil; it has a deleterious effect on air quality; and it's the major cause of the rise in food prices [Source: The Washington Spectator].

The subsidy process, aside from money, requires tremendous legislative efforts: acording to Global Subsidies Initiative [PDF] there are now in place hundreds of programs to subsidize nearly every stage of the ethanol and biodiesel supply chains. The National Biodiesel Board, for example, notes that it is tracking more than 160 pieces of legislation at the state level for biodiesel alone.

It is not only air quality that suffers:

One of the great side-benefits of turning corn into ethanol is that the ethanol plants also produce distiller's grain, which makes good cattle feed. Feed your car, feed your cows. Heck of a deal!

But then along come those darn scientists, having to point out the downside: AP reports that Kansas State University researchers have found cattle fed distiller's grain are twice as likely to carry deadly E. coli 0157. E coli -- that's that bacteria that causes 73,000 infections and 61 deaths each year.

The rise in food prices is not simply because less corn is making it to the kitchen table (about 25% of American corn is diverted from food to fuel), but farmland needed to grow other crops is becoming prohibitively expensive to rent. Land that just a few years ago sold for a few hundred dollars an acre is now going for $10,000 an acre [Ethanol Is Feeding Hot Market for Farmland].

And now the New York Times is suggesting the time has come for Congress to rethink ethanol. One of the reasons: studies suggesting that some biofuels — corn ethanol in particular — could accelerate global warming. Interestingly, while the Old Gray Lady does not miss a sharp dig at President Bush, she did fail to mention Al Gore and his role in saving Ethanol:

Al Gore: "I was also proud to stand up for the ethanol tax exemption when it was under attack in the Congress -- at one point, supplying a tie-breaking vote in the Senate to save it. The more we can make this home-grown fuel a successful, widely-used product, the better-off our farmers and our environment will be."

Even as we learn more and more each day of the Global Warming Hoax, Al Gore is still pushing this now-debunked myth out in Burma blaming the loss of tens of thousands of lives on a Global Warming cyclone instead of the military junta that surely made the disaster worse. Of course, before Al Gore brought us the truth of Global Warming there were never events in our past history of anything like cyclones or earthquakes. These are new phenomena brought on by a greedy, consuming Capitalist culture.

It must have been a wonderful thing - the good old days - before industry and modern civilization screwed up the Earth; imagine a time when there were no natural disasters!

Here for your edification my dear Mr Gore is the inconvenient truths about Ethanol, one of the worst fuels one can use:

Sadly, Presidential Candidates wanting the support of Iowa voters have to pretend that Ethanol is the miracle cure that will get us off the teat of the oil tyrants in countries like Saudi Arabia and Venezuela (it will not), clean up the environment (actually the opposite), save us money (in your dreams), and whiten your teeth. OK, OK, Al Gore didn't promise that last thing. Yet.