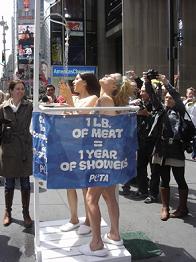 I love PETA demonstrations: we are treated to bare rumps; leafy coverings a la Garden of Eden; naked women showering on the streets of New York, and even celebrity nudes. As always, click on an image for larger, sometimes NSFW, view.

PETA blog, Nothing to see here: Just a couple of chicks and a cowboy in the shower …

The first-ever girl/girl shower demonstration. The purpose of the demo was to remind passersby and the media—just in time for Earth Day—that if they’re worried about the environmental devastation caused by wasting water, they should cut it off at the source … by going vegetarian. Just to spell this point out, it takes 5,000 gallons of water to produce just one pound of meat. Which is roughly equivalent to about a full year’s worth of showers (depending on how clean of a person you are).

I have a better suggestion: any woman who is worried that I might eat a 16 ounce steak should come over and shower with me. Result: save 5,000 gallons a year and I get to eat my steak.

I love statistics. I wondered about the 5k gallons per year figure on showers so I investigated. On average it takes 2 gallons of water per minute to shower. If you shower every day for about 7 minutes you will use 5,110 gallons of water. So that sounds reasonable. However, a few years ago I installed special shower heads that give the same pulse as regular ones but use half the water.

If you flush once a day you use up a thousand gallons of water a year unless you have a power-assist toilet as I do in my home which uses 60% less water.

In addition, many homes have leaks that waste more than 7,000 gallons of water every year. I buy only Kohler plumbing products and with their lifetime guarantee any leaking fixtures are quickly replaced without charge. I also do not run water while brushing my teeth saving another few thousand gallons of water a year.

I estimate that since I am so careful with water conservation I deserve a few steaks a year in compensation, n'est pas, PETA?

But what about the claim that it takes 5,000 gallons of water to produce just one pound of meat? About.com and Earthsave.org both put the figure at 2,500 gallons of water for one pound of beef. I limit my red meat to once a month for health reasons. I could of course live like a monk and live on only a few pieces of bread but who, except for PETA nuts, wants to live like that?

This is what happens when you watch too many Disney Bug movies; just when you think PETA couldn't be more absurd: they now consider insects as animals:

Okie on the Lam, PETA Says, "You Don’t Have the 'Right' To Eat What You Want"

I am disappointed to hear that The Home Depot has started selling ladybugs and praying mantises. These animals may be small, but they aren’t disposable merchandise who deserve to be fried to death in the blazing sun. I urge you to do the right thing and immediately stop selling ladybugs and praying mantises and adopt a policy prohibiting the sale of any live animals. Thank you.

But back to the water issue. If PETA were really concerned about water conservation they should be protesting high rise buildings or car manufacturing; it takes 60,000 gallons of water to make a ton of steel. One day PETA may worry that iron suffers during smelting and we should stop making steel; don't laugh - it's only a matter of time. 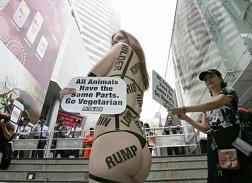 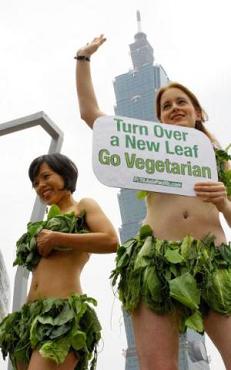 Even candy makers are not safe from PETA scrutiny: 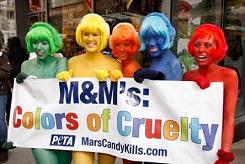 Dec 2007, in Times Square - the girls were
outside the M&Ms World store to let
passersby know that Mars Candy performs
cruel tests on animals.
Photo: AFP/Getty