A Muslim in Plain Sight

I ask that you carefully read the following two stories. The first one is a joke often received in emails and is a complete fiction; the second one is no joke, but was recently reported in the news. See if you can spot how these two stories are related.

A successful rancher died and left everything to his devoted wife.

She was a very good-looking woman and determined to keep the ranch, but knew very little about ranching, so she decided to advertise for a ranch hand.

Two cowboys applied for the job. One was gay and the other a drunk.

She thought hard about it, and when no one else applied, she decided on the gay guy, figuring it would be safer to have him around the house than the drunk.

He proved to be a hard worker who put in long hours every day and knew a lot about ranching.

For weeks, the two of them worked and the ranch was doing very well. Then one day, the rancher's widow said to the hired hand, "You've done a really good job and the ranch looks great. You should go into town and kick up your heels."

The hired hand readily agreed and went into town one Saturday night. One o'clock came, however, and he
didn't return. Two o'clock and no hired hand. Finally he returned around two-thirty, and upon entering the room, he found the rancher's widow sitting by the fireplace with a glass of wine, waiting for him.

She quietly called him over to her. "Unbutton my blouse and take it off," she said. Trembling, he did as she directed. "Now take off my boots." He did as she asked, ever so slowly.

"Now take off my bra." Again, with trembling hands, he did as he was told and dropped it to the floor. Then she looked at him and said, "If you ever wear my clothes into town again, you're fired."

Nidal Malik Hasan is an American-born Muslim of Palestinian descent. As a U.S. Army major serving as a psychiatrist, he often expressed radical Islamic beliefs. In 2008, U.S. intelligence intercepted email communications between Hasan and Anwar al-Awlaki. In one of these Hasan wrote: "I can't wait to join you [in the afterlife]." These were forwarded to FBI terrorism task forces which determined Hasan was not a threat.

[Anwar al-Awlaki is a Muslim lecturer and former imam believed to be a senior talent recruiter and motivator "for al-Qaeda and all of its franchises and investigated a number of times by terrorism investigators. In 2009, he reportedly was promoted to the rank of regional commander within al-Qaeda.]

Hasan was reported to have had difficulties relating to patients which required that he be supervised. Similar problems occurred during his residency.

Reviews showed Hasan to be a loner who was passed along despite professional failings that included missed or failed exams and physical fitness requirements.

His commanders were seriously concerned about his actions and the role his Muslim faith played in interactions with his patients.

On Nov 5 2009 at Fort Hood (the most populous US military base in the world) Hasan killed 13 people and wounded 30 others.

Here is how they are related: In the first story, if you are like most people, the ending should have surprised you; if you were like me, you didn't see it coming.

In the second story, if you are like most people, the ending should not have surprised you; any idiot should have seen it coming. Almost four years ago I warned that Muslims cannot be good citizens of their own countries.

To be fair to our men in uniform, I do not believe it is possible that every single military person who came in contact with Hasan missed the signs that he was a threat to our forces. Sadly, there was no mechanism then nor is there one now to report Muslims who, well, act like Muslims. The fear of being called an Islamophobe, while not a career killer for bloggers like me, certainly is not something a military officer is willing to face.

If one reads the Pentagon’s 84-page report reviewing the Ft Hood massacre [PDF], we still see this country's fear of calling a Muslim a terrorist. So this will happen again.

Dr. M. Zuhdi Jasser, a former lieutenant commander in the United States Navy, is an unusual Muslim (if all Muslims were like him there would be no Islamic threat) who believes that every Muslim military member must be counseled by his imam that "not only does his oath to this country and the military take precedence over any other oath, but the concept of the ummah (as Islamic nation) is dead and no longer relevant or competing for his allegiance from a spiritual perspective."

The Daily Caller, Failing at force protection: The misguided Pentagon report on the Ft. Hood massacre

How can we hold these soldiers responsible for not preventing Hasan’s actions if we aren’t giving them the environment and the tools they need to confront Islamist radicalization? The military cannot allow the mantra of victimization of Muslims to dominate how it handles force protection. Islamist radicalization is real and it cannot be confronted unless we are honest about the threat it represents. Hasan is not the first soldier to be radicalized and he won’t be the last if we do not address the real issues.

When we are unable to discuss complex issues like this and Hasan without the fear of reprisal or labels, we create a vacuum where no discourse is taking place. In that vacuum, we allow the seeds of discontent to grow. For Nidal Hasan that culminated in his superiors ignoring his behaviors and eventually sending him to Fort Hood, where his fate was sealed.

The Pentagon’s review should be revised to look at the broader picture of Hasan’s path to radicalization through political Islam. They should analyze the warning signs that were visible and determine how the military could have better protected its soldiers. They should look at the threat that political Islam and its forms of radicalization have upon American Muslims and contractors that we employ abroad, like the informant who killed seven CIA officers last December.

The protection of our forces requires a better understanding of the enemy we face.

Actually, the protection of all Americans, military and civilian, requires not only a better understanding of the enemy we face, but we must not allow the phrase Islamophobia to be used as a weapon against identifying that enemy. As we did in WWII in alerting our citizens to the Nazi threat, 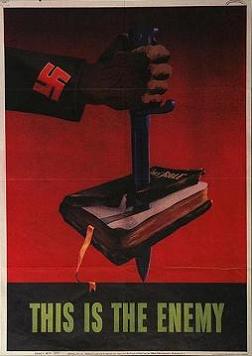 So too should Government posters be alerting our citizens to the Muslim threat and put on every federal government wall: 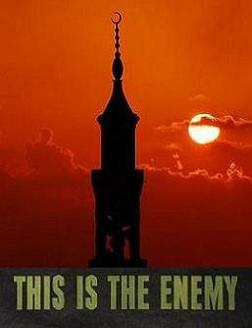 The Islam is the Enemy poster was composed in part from a photo used without permission from Flickr-user muha.