Obama and the Transformation of America 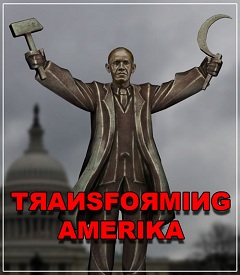 President Obama and the idiots who worship him do not understand the true nature of wealth nor what makes wealth possible, as exemplified by our Idiot-in-Chief when he declares that this election campaign is all about how to create an economy where everybody has a shot at success (1).

No, you moron, the most powerful, the wealthiest, the greatest nation in the world did not come about because our government stuck its nose in everyone's business in order for everyone to have a shot at success. America is successful because for more than 200 years our government stayed the hell out of the way of business and let individuals use their minds to create wealth.

The last country that made sure everyone had an equal shot at success was the Soviet Union. Somehow Obama thinks that system is what our country needs.

Ayn Rand in her novel Atlas Shrugged, informed us: "Wealth is the product of man's capacity to think."

America has never before in her history wasted more money than now on aid, subsidies, entitlements or other waste, and never before in our history have we been so deeply indebted to other nations to keep us afloat.

I am ashamed to say, never before in our history have so many Americans become lazy, worthless, entitlement-minded mooches.

Obama thinks he can re-distribute wealth by government fiat, but one cannot re-distribute the capacity to think. Sure, he can tax the crap out of those who create wealth, but unless they are willing to continue to be bled dry, that money will one day dry up.

And some of the wealthy are leaving. Eduardo Saverin, the billionaire co- founder of Facebook took some heat when he renounced his U.S. citizenship in order to save billions in confiscatory taxes (2). But I see nothing wrong with his actions - what I do find wrong is a tax system that scares away wealth. Instead of taxing people who help create businesses and jobs we should be giving them bonuses. That is why corporations make money while governments only waste money. Corporations do not punish those who make money for them, they reward them. How long would a company last that took money back from those who produced the most? But that's what we do with our tax system.

We now have the second highest corporate tax in the world and we wonder why corporations move their operations overseas. Here is a list from the Federal Register of those who have renounced their citizenship in the past quarter. Keep talking about the wealthy paying their fair share of taxes, Obama, and the wealthy will soon take all their share before you can lay your hands on any of it. And just as corporations have fled our country, so will individuals.

“This is part of the debate that we’re going to be having in this election campaign about how do we create an economy where everybody, from top to bottom, folks on Wall Street and folks on Main Street, have a shot at success. And if they’re working hard and they’re acting responsibly that they’re able to live out the American dream.”

Saverin, 30, joins a growing number of people giving up U.S. citizenship ahead of a possible increase in tax rates for top earners. The Brazilian-born resident of Singapore is one of several people who helped Mark Zuckerberg start Facebook in a Harvard University dormitory and stand to reap billions of dollars after the world’s largest social network holds its IPO.

“It’s plainly lawful and at the same time profoundly ungrateful to the country that provided these opportunities for him,” said Edward Kleinbard, a tax law professor at the University of Southern California in Los Angeles. “He benefited from his U.S. education, the contacts he made at Harvard, and most important the extraordinary openness and flexibility of our economy that encourages startup ventures to flourish.”