I Am Horrified over Photos of Brutally Massacred Children in Gaza

Is there anything more heart-wrenching than seeing the maimed and bloodied bodies of little children? What depraved and savage malevolence caused this death and misery? Whose black and evil souls are we to blame for these crimes against humanity? Please take a look at this collection of images which I found displayed on Shaun Gibson's blog shaunynews: 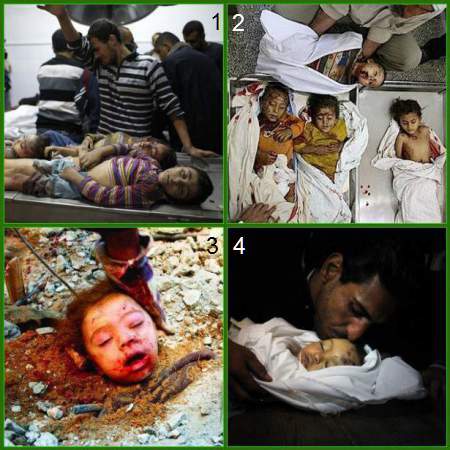 However, these images are not from the current Gaza/Israel conflict, but from 2008, 2009, and 2012; see the photo credits below. As I wrote in my previous article The Difference Between Germany 1940 and Israel 2014, whenever Hamas instigates a retaliatory response from Israel as it did this past July, there is always a flurry of new anti-Israeli blog articles whose authors dredge up trite and previously published propaganda images.

Before any of my readers become outraged that I call images of dead and mangled children trite, please be aware that their suffering or death is not trite, it is the overuse of the images for propaganda stock that is trite.

OK, forget about these photos, but surely there were children who were killed or maimed this July by the IDF. Surely the IDF is responsible for the current crop of Gazan deaths? Actually, no. Let's put aside the fact that Hamas has hundreds of millions of square feet to place their launchers instead of behind schools and hospitals - I'm talking about Hamas purposely bombing their own women and children in order to raise sympathy for their evil and savage cause. Hamas does not allow foreign journalists to report the truth:

Italian journalist Gabriele Barbati said he was able to speak freely about witnessing a Hamas misfire that killed nine children at the Shati camp, confirming the Israel Defense Forces version of events, but only after leaving Gaza, “far from Hamas retaliation.”

He said, “@IDFSpokesperson said truth in communique released yesterday about Shati camp massacre. It was not #Israel behind it.”

On Tuesday, the IDF released aerial photos showing how a rocket from Gaza targeting Israel hit the Shati camp, run by the UNRWA, and Al Shifa Hospital, which has become a de-facto Hamas headquarters, against international rules of war.

Barbati said he was unable to speak about the Al Shifa hit, but he was certain that it was a Hamas rocket that hit the Shati camp, and a witness saw militants rushing to clean the debris.

Blogger Elder of Ziyon, who praised Barbati for telling the truth in a war where many journalists have been intimidated by Hamas, noted that “When Hamas made the area off limits to reporters, it was cleaning the area from any debris that could show the truth.”

So when we see such horrific images of poor children killed in the Gaza/Israeli conflict we know in our hearts that Hamas is to blame and only Hamas.

A Palestinian gunman was killed in the Gaza Strip on April 28, 2008. Sadly for one Palestinian family, he was fighting behind four children and their mother. The four children, aged one to five, lay at a morgue in Beit Lahia,

A Palestinian relative of four sibling children of the al-Dalo family, who were killed in an Israeli air strike, reacts as he stands next their bodies at a hospital in Gaza City November 18, 2012.

A Palestinian pulls the dead body of a child out of the rubble of a three-storey house belonging to a Hamas member, that collapsed after Hamas launched missiles Jan. 6, 2009 in Gaza City.

Palestinian relatives mourn over the body of Hanen Tafish, a 10-month-old girl, at the morgue of the al-Shifa hospital in Gaza City on Thursday, November 15, 2012 after she died following an Israeli air strike in the Zeitun neighbourhood.

Mosaic made with Mosaic Maker