What the F is a College Safe Zone?

When I went to college Wagner College -- 1968-1970 I never had any problems with students reacting to my extreme views back then. As editor of the school student paper however I did ruffle the feathers of a lot of college administration and alumni, but not of students.

Although a number of students wrote letters to the editor disagreeing with my editorials, none of them found the need to run to a safe space to avoid the discomfort of reading or hearing my opinions on race, drugs, politics, dating, etc.

But today we see that many colleges need a Safe Zone; that is, a place for overly-sensitive bleeding-hearts to find refuge from hearing or seeing points of view that may trigger a psychological trauma. Even if certain topics merely make them uncomfortable, students may avoid debate or discussion on those topics by entering the mental equivalent of a panic room, an area on campus where it is forbidden to talk about anything.

My readers may recall my article Trumpophobia Beware the #thechalkening in which I reported that leftist students at Emory University who encountered pro-Trump chalk writings on their campus were so traumatized that they suffered painful anxiety, rashes, nausea, heart palpitations and even near suffocation.

But a detailed internet search for the type of students requiring safe zones will reveal that it is not for those who are religious or who hold conservative political views. Safe Zones are only for left-wing whining little brats who want to avoid debate, discussion or disagreement with their progressive, socialist, fascist, anti-free-speech views. Indeed, Obama's White House encourages such safe zones and has issued guidelines for college administrators on how to implement such zones.

However on some some college campuses the entire campus is a safe zone where nothing can be said that may disturb these poor little babies' minds; where even outside speakers cannot be invited if their topics might be controversial.

So where can one discuss anything of import? Well, some colleges have found a solution: a "free speech zone"— a space that needs to be booked 30 days in advance and where one can write "offensive" phrases such as paragraphs from the US Constitution. 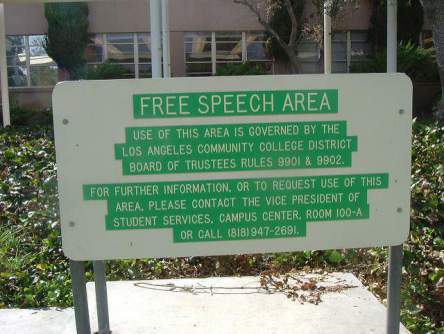 Remember when I wrote a series of articles about Muslim No Go Zones, areas of a country where non-Muslims may not enter at the pain of death, not even police, fire, or emergency medical personnel? Well, now we have Leftist No Go Zones on hundreds of American college campuses where Free Speech is forbidden.

But what can we expect from students when they see that our government is more interested in political correctness than in protecting us from Islamic Terror; that our government takes the side of a criminal thug rather than a police officer who did exactly what a sane society would demand of him.

Oh Obama - what have you wrought?