I have previously reported on the population crises in Russia in my article Islamic Russia and the End of Civilization.

Although most of the world is getting overpopulated, Russia and the more developed nations have a birthrate that is too low. 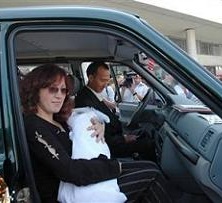 The Kartuzov family drive away in their
new UAZ-Patriot SUV, which they won as
a grand prize in a regional contest titled
"Give Birth to a Patriot on Russia's
Independence Day."
A Russian region best known as the birthplace of Vladimir Lenin has found a novel way to fight the nation’s birthrate crisis: It has declared Sept. 12 the Day of Conception and for the third year running is giving couples time off from work to procreate.

The hope is for a brood of babies exactly nine months later on Russia’s national day. Couples who "give birth to a patriot” during the June 12 festivities win money, cars, refrigerators and other prizes.

Ironically, its next door Communist neighbor, China, has too many babies, see China's one Child Rule and unintended consequences; however, allowing millions of Chinese immigrants into Russia is politically impossible given China's territorial disputes over areas now belonging to Russia.

But giving rewards to have babies is not just limited to Russia; it's already happened in Japan:

Under pressure from politicians worried about the implications of a declining population, Japan’s big companies have started offering special deals to workers with children in an effort to reverse a dramatic fall in the national birth rate.

In the most startling development, Matsushita has struck a deal with its unions to put the bulk of pay increases this year into special allowances to encourage workers to have children.

Middle-class mothers in France could be paid up to €1,000 (£675) a month - almost the minimum wage - to stop work for a year and have a third child under a government scheme to boost the birthrate, already among the highest in Europe.

Despite female employment statistics that are the envy of the continent, the government remains worried about the reluctance of better-educated women to have babies. A plan to be unveiled by the prime minister, Dominique de Villepin, today is expected to double an existing cash incentive for big families.

Even though France has the highest birthrate in Europe 1.9, it is still below the maintenance rate of 2.0. In fact all of Europe faces a serious demographic decline, with only Muslims reproducing fast enough to keep their numbers high.

My previous article on the exploding Islamic population problem in the West: It's the demographics, stupid - the Flight from Islam: "Hopefully we can keep America from the same infestation of Muslims that has overtaken Europe so that Europe's non-Muslim population has a safe haven to emigrate to."